Side projects are a near-ubiquitous thing that developers of almost every background tend to have. We've all heard stories about how side projects that were intended to solve small problems their respective authors had made them millions[1][2].

A frequent sentiment I hear from developers all experience levels is the number of unfinished side projects they tend to have. This is such a widely understood feeling in fact that the consistently excellent CommitStrip webcomic published a strip on the issue. 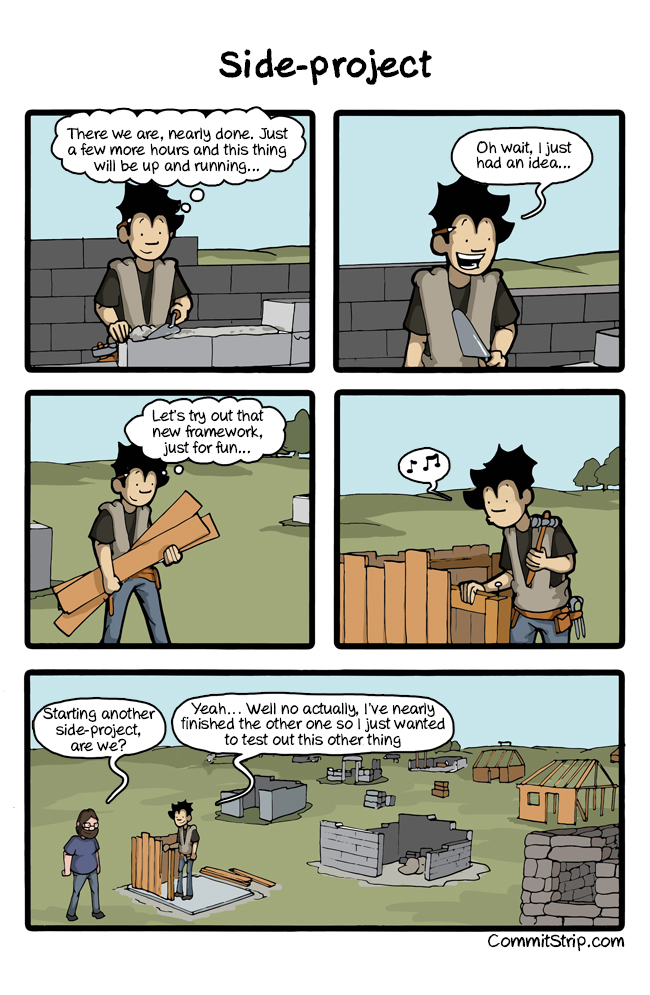 The general flow is to start a super exciting thing, and after a while, it quickly loses its novelty and you move on to the big exciting next thing. Unfortunately, with all the major side project success stories and literature focusing on discipline and productivity[3][4] or lack thereof as the cause why projects don't see completion, it can feel like there's an implicit expectation to finish whatever side projects you start. I've seen frustration behind this expectation this used as a rationale to avoid starting new projects. To paraphrase a recent conversation I had.

"Ugh... I already have a lot of unfinished projects. If I start this it's probably going to end up in that pile and I'm going to feel bad that it's going to go nowhere..."

If you can relate to this, you aren't alone. While I'm not arguing against the benefits of working on projects to completion, I do want to make a case for why not completing your various side projects is not necessarily a bad thing.

Why do developers have side projects?

To dive into this I think it's important to do some introspection to understand why we build side projects in the first place. While this is largely a subjective question with more valid answers than there are developers, a lot of the literature on the subject tends to converge on a few broad reasons[5][6],

As a result, it's valid to conclude that,

The goal of every side project isn't to deliver software.

Knowing that the goals differ based on the type of project, it's inevitable that once a project's author gets what they want out of a project, the novelty wears off and they naturally move on to the next novel idea or experiment.

Being aware that delivering a complete product is not always the goal means that you are now empowered to maximize the return on the true aim of the project.

Okay, but how do I finish the projects that I want to finish?

Sometimes you do have projects where the primary goal is completion.

For side projects where the end goal is delivering some kind of product to users. It's worth approaching your side project with the same level of organization you would a real project with a clearly defined scope, deadlines, and deliverables.