I came across an interesting tool over the weekend. Kanye rest is a quick hack that a couple of students over in Manchester put together over a long weekend[1]. It's a fully Restful API that has some pretty interesting endpoints[1:1]. For example, the album endpoint returns the lyrics of a specified album:

Issuing a request on using the link returns the following output (scaled down for this post):

However, what I found most interesting was the counter endpoint:

which the authors describe as:

This endpoint returns the count of each word used by King Kanye in all his songs. Ever.

Given such a large set of data, the possibilities for analysis are endless. For example, sorting the words by frequency of occurrence reveals Kanye's top 10 most commonly used words to be:

To put this into context, the most common words in the English language[1:2] are:

While it is certainly of remarkable (although not completely unexpected) that his most commonly used word is I, a much bigger question would be;

Zipf's law[1:3] is discrete power law probability distribution that can be observed in natural language corpus. It formally states that, 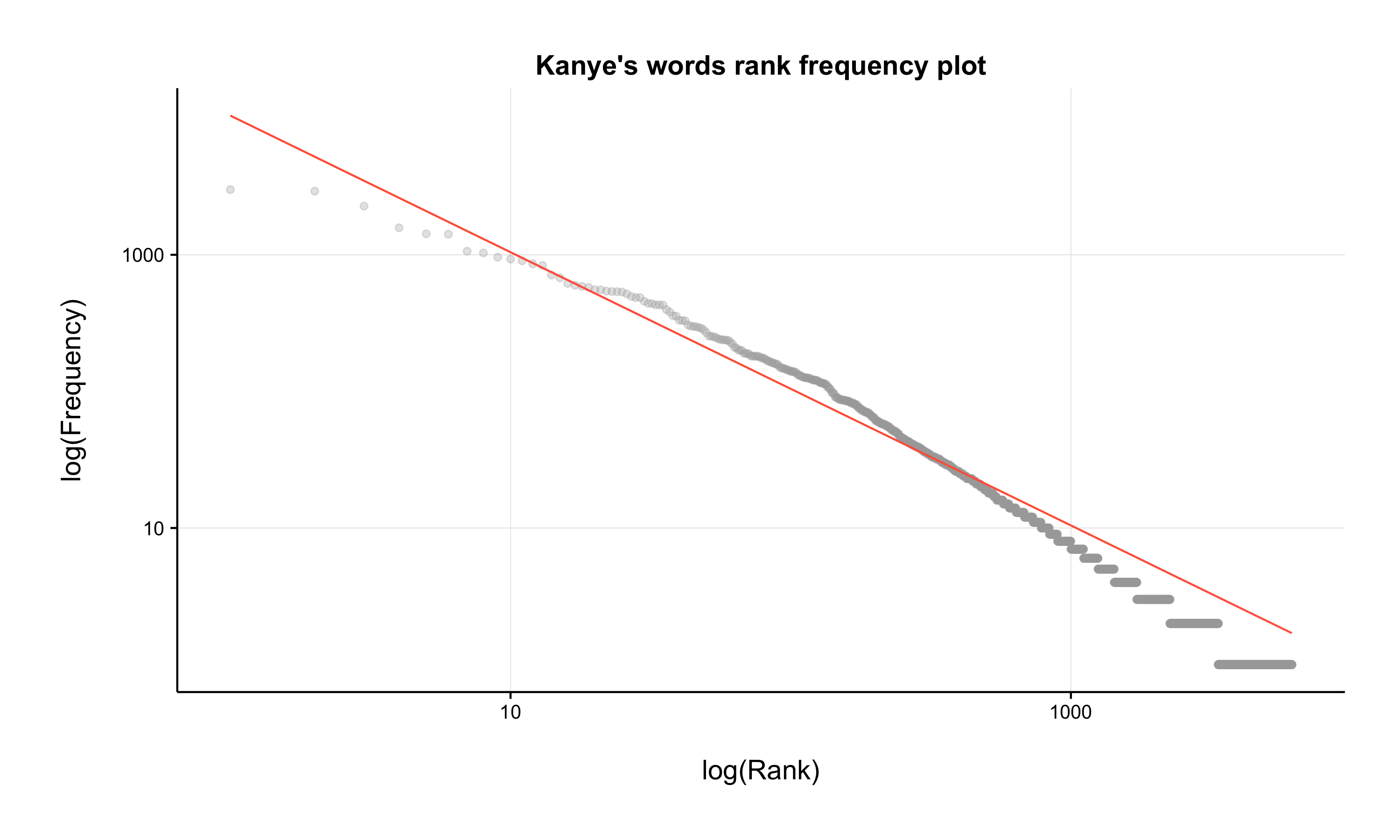 From the plot what's apparent (besides Kanye's rather surprising humility) is the trend towards the predicted Zipf's distribution for this data set. It also shows that he tends to use higher ranked words more often than expected. I speculate that this may be attributed to the nature of his art form; songs tend to repeat certain word groups a lot (Rihanna's recent single work[1:5] comes to mind).

Some other noteworthy statistics worth noting from further analyzing the data shows:

While some may argue that Kanye's lyrics are incendiary, the analysis demonstrated above shows that they are not exempt from Zipf's law. While the distribution above loosely followed the predicted trend, there is a correlation. This could adjusted for through an application of the Zipf–Mandelbrot's[1:7] law.

As a topic of further research, it may be of interest to see if other artists follow similar trends and if there are variations across music genres. This could possibly be done by analyzing data obtained through a more comprehensive service such as the Genius API[1:8].